Wedding music - How to choose the core songs for your ceremony 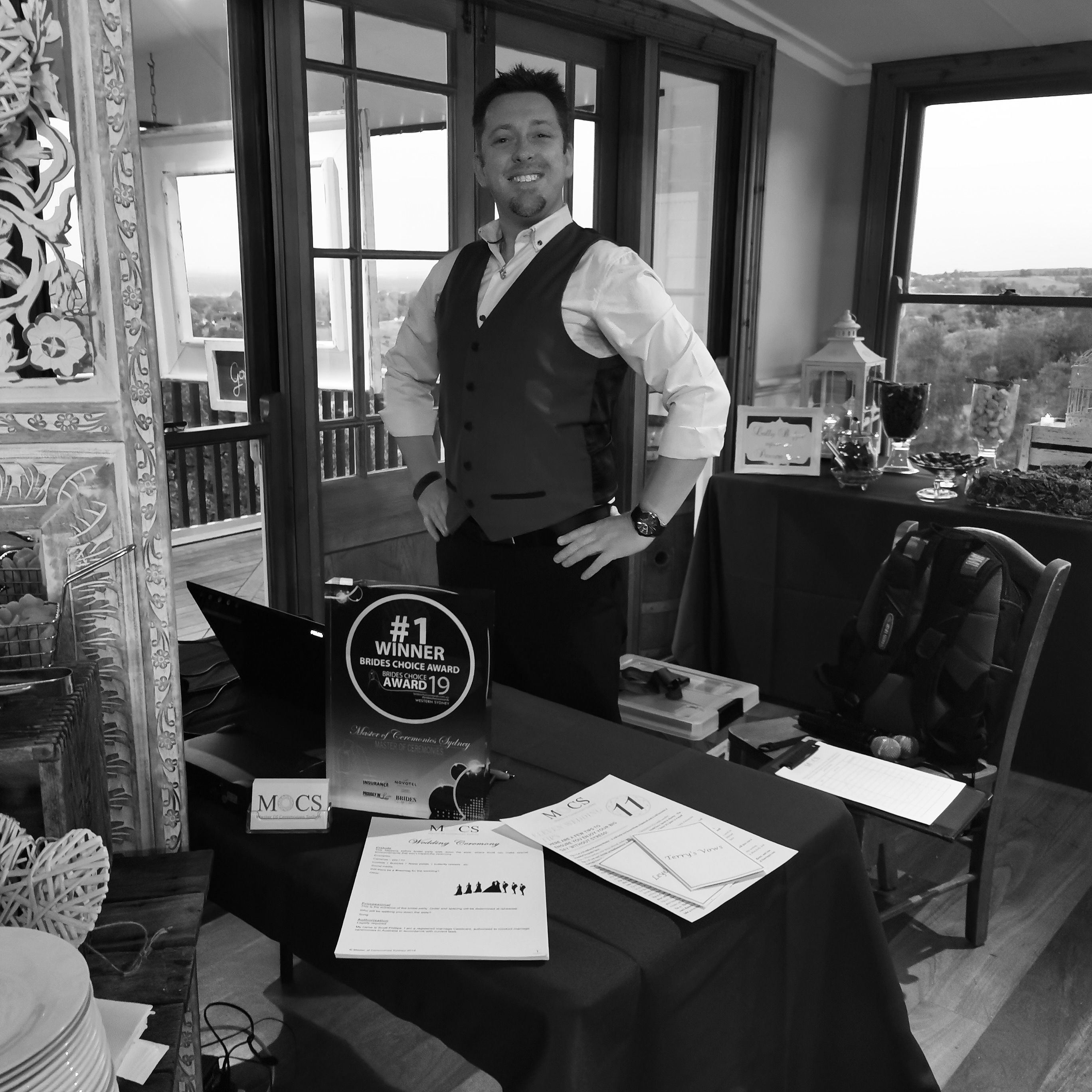 What a busy couple of months it’s been! Winter is supposed to be slow for the wedding industry, but brides and grooms are realising that Sydney doesn’t really get that cold during winter, and it’s more comfortable to wear suits and beautiful wedding gowns in the cool weather rather than standing for half an hour in the hot sun of summer (not to mention getting the photos done during the afternoon heat!). We’re already starting to receive bookings for winter next year, so if you’ve booked a venue between June and August to take advantage of those winter prices, don’t delay in contacting us if you want Scott as your Celebrant and/or MC for your wedding.

Speaking of bookings, one of the big conversations we have with couples when we meet them is about music. Choosing music for your wedding day is harder than it looks. Your core music choices set the tone (pun intended!) of your big day, but it's so subjective, and everyone has different tastes and styles. You and your fiance might have a song that's "your song" but it doesn't have what most people would consider a wedding ‘feel’.

Don’t despair though, if you really want that song, you could see if there's a cover that’s either instrumental or a slower version, or you can use the original for one of the two songs required during the Signing part of the ceremony.

But wait, I can hear you asking, the signing part? I thought I just had to supply a song for the walk down the aisle?

Yes, you do need a song for walking down the aisle, called the Processional. Depending on the length of the aisle or the size of your bridal party, you might need two songs. But how do you choose "The Song"? You might already have the song picked out, and known what it would be since you first started dreaming about what your wedding would be like, or you might go the traditional route and choose Pachebel's canon in D Major. Or your fiance might have a song that you know reminds them of you. It needs to be something with enough beat to walk down the aisle at a dignified pace, but not too fast, as your photographer will have trouble getting photos of the bride and the bridal party during the processional, and not too slow, or your guests will start to wonder about when their next car registration bill is due.

Scott's suggestions: "I'm Gonna Be (500 Miles)" by Sleeping at Last / "There Will Be Time" Mumford & Sons, Baaba Maal

Keira's suggestions: "A Thousand Years" by Christina Perri (some people think this is a bit of a cliche, but it's such a beautiful song, and the beat is perfect for walking down the aisle.) A gorgeous instrumental version has been recorded by the Piano Guys, check it out. My other suggestion is the main "Star Wars Theme", if you're a bit of a geek like me, it's a lot of fun, and actually has the perfect beat for walking down the aisle.

Tip #1 - keep this song a secret from the groom. Don't let him come to the rehearsal (or kick him out of the rehearsal once he's had a chance to catch up with the celebrant). That way the emotional impact of the song choice and seeing you walk down the aisle for the first time.

This occurs towards the end of the ceremony, when the couple sign the legal marriage documents, along with their two witnesses and the Celebrant. There are three documents to sign, the Official Marriage Certificate, the Commemorative Marriage Certificate, and the Celebrant's Marriage Register. That takes up about one song. Then your photographer will most likely want to get photos of you and your witnesses pretending to sign and looking up at the camera (no double chins from looking down!), so another song is required.

These two signing songs can be literally anything you like. They are fillers, so your guests don't have to sit in awkward silence while you sign the paperwork, and this is the perfect place to put songs that are more suited to your personal taste. We've had country, metal, rock, classical, R'n'B, pretty much anything goes.

Scott's suggestions: "Somewhere over the Rainbow" Israel Kamakawiwo'ole or mix it up and pick the theme song from the first movie you saw together or favourite TV shows, the MacGyver Theme would definitely get a giggle and the feet tapping.  The idea is to keep your guests entertained while the paperwork is signed. 😉

Keira's suggestions: I second Scott's suggestions about the theme songs from movies or favourite TV shows, or you could do something really tongue in cheek and play "Highway to Hell" by AC/DC!

Tip #2: Although anything goes, we do request that the second song is instrumental, if possible. That way if the photos don't take up the full song it's easier to fade out.

Congratulations, you're now officially married! This song should reflect that. You've said your vows to each other, you've spoken the legal, binding words to become newlyweds, you've signed all the official paperwork, now it's time to party! Pick a song that is upbeat and celebratory for your first official walk as a married couple, something that will get people up, clapping their hands and stamping their feet. Maybe you could even have a dance as you head back down the aisle too.

Keira's suggestions: Scott stole my idea of Signed, Sealed, Delivered (I'm Yours), so I'll go with "Marry You" Bruno Mars, it has a nice upbeat feel, or the credit song from the Princess Bride, "Storybook Love" by Mark Knopfler. Not as upbeat but it's super romantic!

Tip #3: Ask for this song to be turned up to full volume. Who cares if the neighbours can hear? You just married the love of your life. Enjoy the moment.

Scott and I have a few Spotify playlists we've put together for each part of the ceremony, and we continue to update it so don't hesitate to check them out:

Tune in next week for my post about the core wedding reception songs :).

If you'd like to have a chat or meet with us in person to see if Scott is the right Marriage Celebrant or Professional MC for you, get in contact through our contact form, or contact us directly on info@masterofceremoniessydney.com or 0402 001 462 (me) or 0412 996 354 (Scott). We would love to hear from you!

About the team at Master of Ceremonies Sydney

I’m really a dog person, but a 12-year-old cat named Morgan has somehow managed to turn me into one of her minions.

We believe that every event, whether it is a wedding ceremony, wedding reception, a corporate function (even a Christmas party), a charity event, an expo or trade show, will be a Moment of Truth. A moment that will form memories, bonds and goodwill that will carry a lasting impression.

As a Celebrant I believe in creating a magical, memorable ceremony that will be remembered for years to come, and to do that I ensure each ceremony is unique and tailored to the bride and groom, who they are individually and as a couple.

I'm Keira Brown and I’m a writer, cat lover, and new owner of a dog named Bear, who lives up to his name in size and looks, but he’s really cuddly.

I used to be completely uninterested in marriage, weddings, relationships, anything to do with love really. Not because I'd had my heart broken, but because to me it just didn’t seem that important. Then I met Scott, and my life, my entire world changed. Everything was about weddings, because that's what he does. And gradually, as I fell deeper in love with Scott and started helping him with Master of Ceremonies Sydney, I finally got it. It's not about the marriage, or the reception, decorations or food, or even the ceremony - it's about two people declaring their love for each other before the entire world. An irrevocable promise to always be there for each other.

I quit my day job, and now help Scott run Master of Ceremonies Sydney full time. I get to merge my love of writing stories with my passion for writing an unforgettable ceremony. It’s been a hell of a ride. I can't wait to see what happens next!